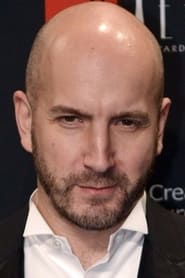 Evgueni Galperine (born 1974) and Sacha Galperine (born 1980) are Russian-born French film score composers and brothers. They were born in Russia and studied music in Moscow, but moved to Paris, France, in 1990. In 2012, they were nominated for the Goya Award for Best Original Score for Eva. The Galperine brothers wrote the music for the 2017 film Loveless after hearing a synopsis of the story, but not seeing the film or reading the screenplay. Evgueni Galperine said the piece "11 Cycles of E" was written as an interpretation of a parent's thoughts, with the parent only being able to think about how a missing child must be found. Critic David Ehrlich named Evgueni and Sacha Galperine's score as the ninth best cinematic soundtrack of 2017, particularly praising "11 Cycles of E" as "striking". For Loveless, the brothers jointly won the European Film Award for Best Composer. Source: Article "Evgueni and Sacha Galperine" from Wikipedia in english, licensed under CC-BY-SA 3.0.