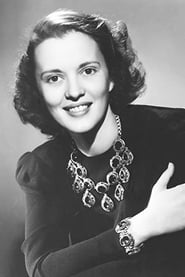 From Wikipedia, the free encyclopediaGale Page (born Sally Perkins Rutter July 29, 1910 – January 8, 1983) was an American singer and actress.Page was the daughter of R.L. and Isabel (Gale) Rutter of Spokane. Her aunt and uncle were Elizabeth Gale Page (1866-1929) and Miles Poindexter, a U.S. senator from Washington and later U.S. Ambassador to Peru. She was also the great-granddaughter of Joseph Gale, the first governor of Oregon.Page was a radio actress and singer before being signed to a Hollywood film contract by Warner Brothers in 1938. She sang on a Spokane station before getting a job on KYW radio in Chicago, Illinois, subsequently moving to NBC, where her network activities included singing on Fibber McGee and Molly. Page was cast as blues singer Gertrude Lamont in the 1935 soap opera Masquerade. Beginning on May 27, 1936, she played Gloria Marsh on the soap opera Today's Children. In the summer of 1939, she co-starred with Jim Ameche on Hollywood Playhouse.She made her film debut in Crime School (1938) with Humphrey Bogart and also appeared in The Amazing Dr. Clitterhouse (1938) before winning the role of the fourth daughter in Four Daughters (1938). She co-starred in this with the Lane Sisters and was the only film "daughter" not played by one of the Lanes. She appeared in three other films with the Lane sisters: Daughters Courageous (1939) and the two "Four Daughters" sequels: Four Wives (1939) and Four Mothers (1941).Page appeared in only 16 films during her career, including Heart of the North (1938), You Can't Get Away with Murder (1939), Naughty but Nice (1939), They Drive by Night (1940), Knute Rockne, All American (1940), The Time of Your Life (1948), and Anna Lucasta (1949).Page was a semi-regular performer on the television series Robert Montgomery Presents from 1954 until 1957.Page died in Santa Monica, California, aged 72, from lung cancer.