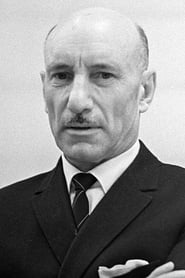 Sergei Appolinarievich Gerasimov (21 May 1906 – 26 November 1985) was one of the most reputable Soviet film directors and screenwriters.The oldest film school in the world, the VGIK, bears his name. Gerasimov started his film industry career as an actor in 1924. At first he appeared in Kozintsev and Trauberg films, such as The Overcoat and The New Babylon. Later, he was commissioned to produce screen versions of the literary classics of Socialist realism. His epic screenings of Alexander Fadeyev's The Young Guard (1948) and Mikhail Sholokhov's And Quiet Flows the Don (1957–58) were extolled by the authorities as exemplary.During several decades of their teaching in the VGIK Gerasimov and his wife Tamara Makarova prepared many generations of Russian actors. In his last movie Gerasimov played Leo Tolstoy, while Makarova was cast as Tolstoy's wife. Gerasimov is buried in the Novodevichy Cemetery of Moscow. Description above from the Wikipedia article Sergei Gerasimov (film director), licensed under CC-BY-SA, full list of contributors on Wikipedia.From Wikipedia, the free encyclopedia.