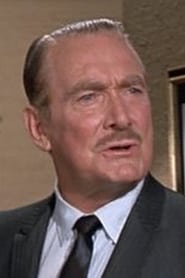 From Wikipedia, the free encyclopedia Roy Roberts (born Roy Barnes Jones, March 19, 1906 – May 28, 1975) was an American character actor. Over his more than 40-year career, he appeared in more than nine hundred productions on stage and screen. Born in Dade City in Pasco County, near Tampa, Florida, Roberts began his acting career on the stage, first appearing on Broadway in May 1931 before making his motion picture debut in Gold Bricks, a 1936 two-reel comedy short released by 20th Century-Fox. He appeared in numerous films in secondary parts and returned to perform on Broadway in such productions as Twentieth Century, My Sister Eileen, and Carnival in Flanders until he began making guest appearances on television series. After appearing on Gale Storm's My Little Margie in 1956, he became part of several television series for which he is best remembered. In a show that was the precursor to The Love Boat, Roberts played the ship's captain for four years in Storm's next hit, Oh! Susanna, which aired on CBS and ABC from 1956 to 1960. He guest-starred in scores of series, including the western-themed crime drama, Sheriff of Cochise, the western series, My Friend Flicka, The Life and Legend of Wyatt Earp (as Texas cattle baron Shanghai Pierce[1]), and The Travels of Jaimie McPheeters, and Brian Keith's Cold War drama, Crusader. Roberts appeared on four episodes of the CBS legal drama, Perry Mason, including the role of murderer Arthur Janeel in the 1961 episode, "The Case of the Malicious Mariner." During the middle 1960s, Roberts was one of the most recognizable faces on television, and had recurring roles concurrently on a number of popular programs, including: Bank president Mr. Cheever on CBS's The Lucy Show John Cushing, president of the rival Merchants Bank on CBS's The Beverly Hillbillies Railroad president Norman Curtis on CBS's Petticoat Junction Darrin's father Frank Stephens on ABC's Bewitched, alternating with actor Robert F. Simon depending upon availability. Banker Harry Bodkin on CBS's Gunsmoke Dr. Reynolds, twice on The Road West Neighbor Bruce MacDermott on ABC's Our Man Higgins Preston "Press" Wasco and Kelly on the NBC western, Laredo "Doc" on John Payne's The Restless Gun in the 1957 episode "Trail to Sunset" Banker George Bristol on NBC's Bonanza Admiral Rogers on McHale's Navy (in some episodes, his first name is given as "John" and in others his name is given as "Bruce"). The Governor in a season two episode of Green Acres, "One of Our Assemblymen is Missing". CLR