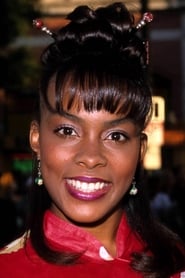 Ebonie Michelle Smith is a former child actress known for her role as Jessica Jefferson in the sitcom The Jeffersons from 1984 to 1985. She was sometimes credited as Ebony Smith. Smith also played character M'Lila on the television series Xena and portrayed a young La Toya Jackson on the television miniseries The Jacksons: An American Dream. She is also known for playing Carrie Murtaugh in the Lethal Weapon movies and had recurring roles on Webster and Family Matters.