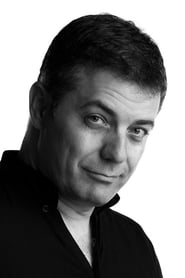 Dragoljub Mićko Ljubičić is a Serbian actor, humorist, and comedian best known for his involvement with Indexovo radio pozorište.  He studied at the University of Belgrade and was simultaneously involved with music and theatre. From 1982 until 1985 he played in two bands: Petar i zli vuci and Kapetan Belkanto. In 1984 he joined Indexovo radio pozorište (Index's Radio Theatre) a popular Serbian radio programme that eventually grew into a theatrical group. In 1993 he appeared in director Želimir Žilnik's semi-documentary film Tito po drugi put medju Srbima. He played the role of Josip Broz Tito, who returns from the dead to Serbia that's ruled by Slobodan Milošević, and talks with random people on the streets of Belgrade about their current grievances. From 1985 and onwards he founded and became the director of "Tim talenata" marketing agency. He has since been involved with several productions and radio shows as well as written the book "Nacionalni park Srbija" (National Park Serbia).